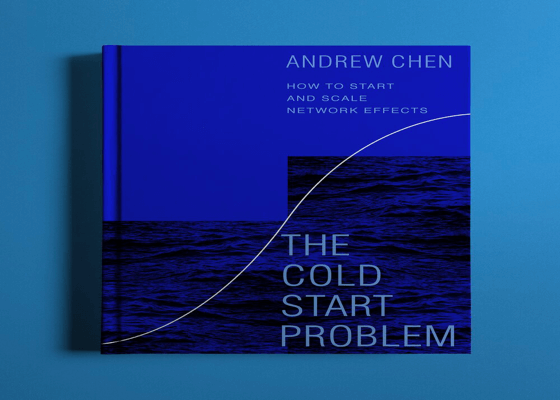 You’ve got a new product or service you want to introduce to the world. The problem is, no one knows about you or your product. How do you get those first users onboard? And how do you leverage those first users into a larger market share?

Those are the questions Andrew Chen answers in his new book, “The Cold Start Problem,” which promises to explain how to start, grow and defend successful businesses.

It’s difficult to get momentum when there are no existing users, just as it’s harder to start a car engine when it’s cold.

And if you don’t overcome this cold start problem quickly, your new product will likely die.

“A network effect describes what happens when products become more valuable as more people use them,” Chen writes. Think of a dating website – it’s worthless if there are only a handful of members. But as the membership grows, the site become more valuable to both users and the site’s owner.

Many dominant businesses got their early start by serving niche markets, what Chen calls “atomic networks.” For example, Bank of America launched their first credit card just in Fresno, California in 1958 to 60,000 residents. Tinder and Facebook each started in a single college community before branching out.

Conversely, Google tried to launch its failed Google+ social network with a large-scale launch targeting everyone rather than first establishing a successful atomic launch.

“Your product’s first atomic network is probably smaller and more specific than you think,” Chen advises.

Determine who you are targeting as the first users of your product and service and then find a way to get them on board. Tinder initially threw big parties for college fraternity and sorority members to get them to use the app. Uber offered extensive bonuses and financial incentives for its first drivers, which were targeted in very specific locations.

Says Chen, “The product idea itself should be as simple as possible – easily understandable by anyone as soon as they encounter it. At the same time, it should simultaneously bring together a rich, complex, infinite network of users that is impossible to copy by competitors.” An example is Zoom, with its simple interface and freemium model that encourages new users.

Once a product has succeeded in its atomic market, then its creators can extend it to adjacent markets, such as other demographics or locations, until a tipping is reached and the product is a success.

Side Note: On TechCrunch I see news of a new app called Go Disco that curates local events to get you doing cool stuff around town. Scrolling down, I read that Go Disco is only launching in Los Angeles, but plans to expand to New York, Washington DC, San Francisco, Miami, Portland and Austin in 2022. This is a perfect real-world current example of the Atomic Network launch referred to by Chen in his new book.

Entrepreneur Chris Harris has been actively running a successful home based business with a computer since. 2004. Chris Harris also runs this website https://www.InternetBusinessKickStart.info, the Internet's number #1 destination for you, if you are looking at starting an online business and also for forward-thinking entrepreneurs.